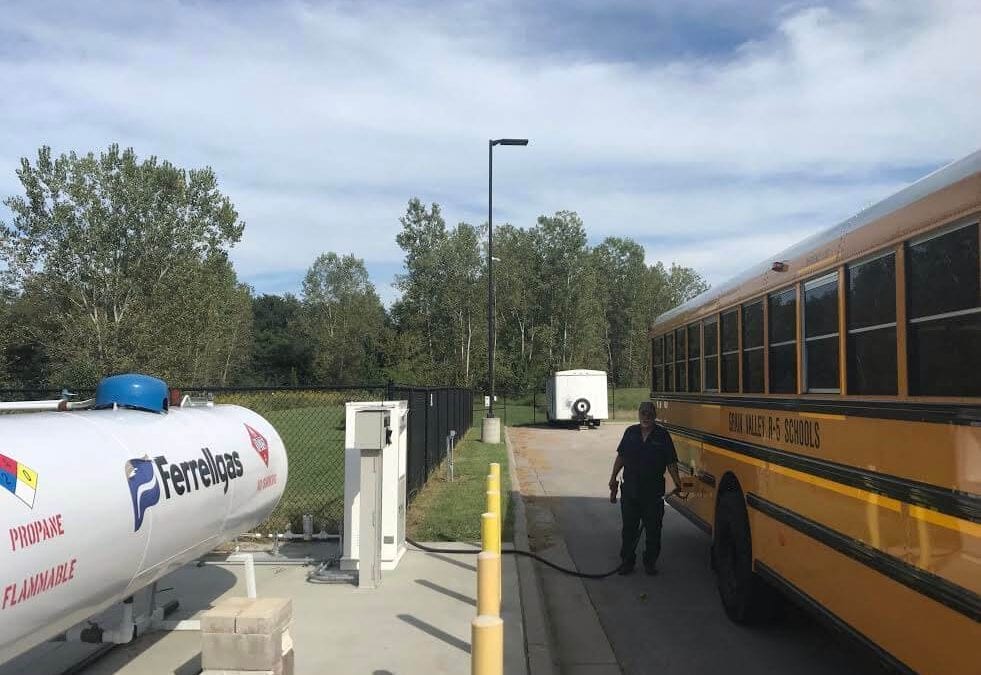 Since it replaced aging diesel buses with propane autogas buses, the Grain Valley School District in Missouri has been saving money on fuel and maintenance costs.

When looking at bus replacements, district representatives attended an alternative fuels workshop hosted by Kansas City Regional Clean Cities. The district considered various fuels, but “the vehicle costs and fueling station costs for CNG were much higher versus propane,” according to Shawn Brady, director of transportation. Brady then applied for a grant from the U.S. Department of Energy through Kansas City Regional Clean Cities to assist with the cost of the propane buses.

The school district entered into a contract with Ferrellgas, and a fueling station with two 1,000-gallon tanks was built in the district’s bus parking lot in April 2018. The start-up cost for the fueling station totaled $16,500, but the district received a $7,425 grant from the Metropolitan Energy Center, cutting the cost to $9,075.

Before putting the new buses on routes, drivers received training in propane autogas bus operation. The district’s technicians traveled to the bus manufacturer’s factory in Tulsa, Okla., for a weeklong training course on maintenance. Notably, the district didn’t need to make changes to its bus repair facility; requirements for a propane vehicle service facility are generally the same as those for conventionally fueled vehicles.

“Our bus vendor provided training on how to properly operate the buses and maximize fuel efficiency,” Brady says.

After tapping grants for purchase assistance, each new bus cost about $250 more than a comparable diesel bus. However, Grain Valley School District has noted savings on both fuel and maintenance. As part of its negotiated contract, Grain Valley paid a locked-in rate of $1.20/gallon of propane in 2018-2019. For the 2019-2020 school year, the district pays $1.15/gallon. For comparison, it pays $2.31/gallon, on average, for diesel.