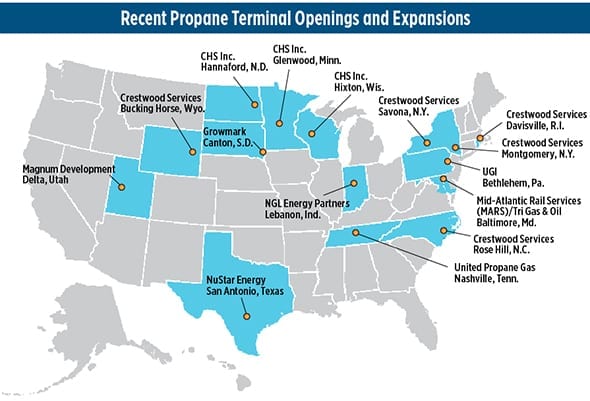 The winters that followed were relatively uneventful in terms of supply and storage discussions, but the end of 2019 brought the industry back to this conversation. Farmers faced a wet and cold harvest, causing substantial propane demand for crop drying, animal heat and residential space heating. The industry struggled to keep up. The problem in 2019, however, was not so much about supply, but rather storage and logistics.

Across the country, over the past five years, midstream suppliers and retailers worked to increase storage capacity through the addition of rail terminals, allowing local marketers unfettered access to reliable propane supply. Rail is key to moving propane where it is needed, especially when end users are not located in proximity to a propane pipeline. Rail-supplied terminals help stabilize prices for local and regional propane providers by precluding the use of trucks to transport propane great distances to rural areas, including much of the North and Midwest, where agriculture and heating needs are often urgent and extreme.

In a rail-supplied propane terminal, product primarily sourced from shale plays like the Marcellus, Permian and Eagle Ford is offloaded from railcars using compressors, stored and then loaded via pumps into trucks that transport the product to bulk plants, which in turn load local vehicles like bobtails.

Distances and aggregate storage capacities (i.e., total storage available) can place limits on storage and rail capabilities. The midstream supplier must assess past purchases, logistics associated with moving fuel from nearby refineries, and geographic needs based on historical data, along with supply and demand. The most critical part of building an advanced rail-supplied propane terminal lies in efficiency of both rail switches and the unloading of propane tank railcars.

Railcar-supplied propane terminals make sense for many applications, but none more crucial than when changes are made to major pipelines. Perhaps the best example of this occurred a few years ago when the Cochin pipeline was reversed. For decades, propane had been transported via the Cochin pipeline from Saskatchewan, Canada, to Chicago, reliably serving residents, businesses and farms in the Upper Midwest. But in early 2014, pipeline owner Kinder Morgan began sending light condensate westbound from Chicago to Saskatchewan. Thus, a reliable regional propane source disappeared for farm cooperative CHS Inc., a propane wholesaler.

The most viable solution for CHS was to build a series of rail-supplied propane terminals along the route of the Cochin pipeline. Superior Energy Systems constructed three terminals for CHS, located in Hannaford, North Dakota; Glenwood, Minnesota.; and Hixton, Wisconsin, over the span of 18 months.

Efficient site design and safety compliance were CHS’ main priorities with the multi-terminal construction. The terminals each comprise a system designed to offload propane from railcars via vapor compressors into several 90,000-gallon tank farms.

This report was prepared by Crystelle Markley, marketing director for Superior Energy Systems, based in Columbia Station, Ohio. To see the original article, click here.