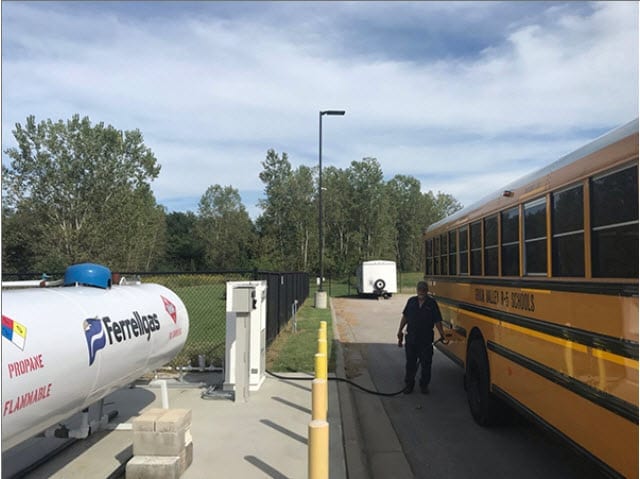 Missouri state reimbursements for school transportation have dropped from 75 percent to 16 to 20 percent in recent years, the school district explains, meaning school districts need to make up for the remaining cost. Grain Valley School District representatives attended an alternative fuels workshop hosted by Kansas City Regional Clean Cities to consider compressed natural gas and propane autogas school buses as a means of saving money on transportation. Ultimately, the district purchased 14 propane buses in 2018 to replace diesel buses of 2001 and 2002 model years. Shawn Brady, the director of transportation for Grain Valley School District, researched and applied for a grant from the U.S. Department of Energy through Kansas City Regional Clean Cities to assist with the purchasing costs. The district plans to move eventually to an all-propane fleet.

Grain Valley School District partnered with Ferrellgas to fuel the newly acquired propane-powered buses. In April 2018, the school district installed a fueling station with two 1,000-gallon tanks in the bus parking lot. Brady says having the fueling station on-site saves time on the refueling process. Drivers also report that the propane dispenser pumps are comparable to the diesel fuel pump. Prior to operating these new buses, drivers received training. The district’s technicians traveled to the bus manufacturer’s factory in Tulsa, Oklahoma, for a maintenance training course.

With the help of grant money, each new bus cost about $250 more than a comparable diesel bus. However, the school district says the higher initial cost was quickly recouped in fuel savings. By adding propane buses to its fleet, Grain Valley School District says it’s seen savings on both fuel and maintenance. As part of its negotiated contract, Grain Valley paid a locked-in rate of $1.20 per gallon of propane in 2018-19. For the 2019-20 school year, the district pays $1.15 per gallon. For comparison, the district pays $2.31 per gallon on average for diesel. Each bus in the district runs about 9,000 miles per year. For the 2018-19 school year, fuel savings amounted to about $14,500. Even more saving shows up for the district in the winter. Due to the chemical properties of propane autogas, the propane buses warm up faster and have no cold-start issues. Unlike diesel vehicles, these buses can start up in temperatures as low as minus 40 degrees F. School districts report lower electric costs because the propane buses don’t rely on block heaters.