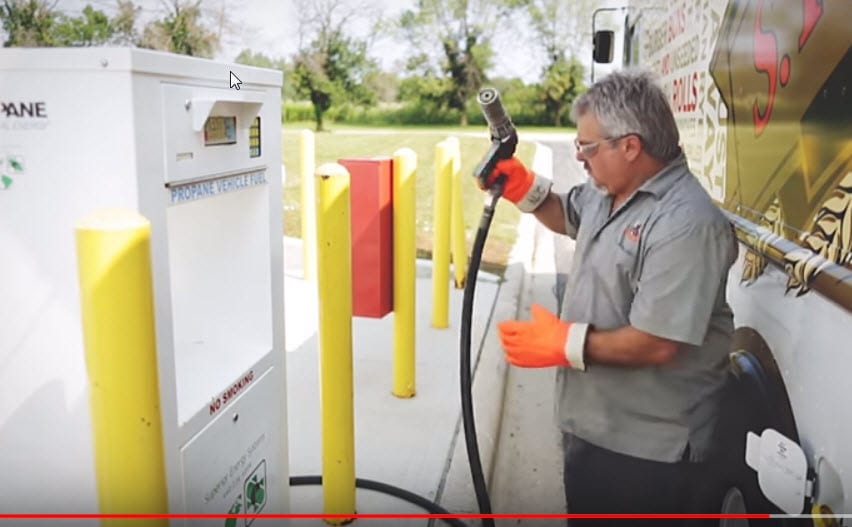 In 1912, American chemist Walter O. Snelling discovered propane existed within gasoline as an evaporating gas that could be changed into liquid and stored at moderate pressure. Very soon after, marketers recognized that distinguished it as an easily transportable fuel.

The U.S. propane industry ramped up quickly during the 1920s, heating homes and finding its way into industrial applications. By 1950, propane-powered buses were appearing on city streets. By the 1960s, truck engines engineered to run on propane were becoming available.

So, it could be argued that propane is not so much an alternative truck fuel as it is the “other”— and long-available – fuel for trucks.

Propane’s growth as a clean fuel was propelled largely by the Energy Policy Act of 1992 listing it as an alternative fuel. According to the Department of Energy, propane has a lower carbon content than gasoline and diesel fuel, and when used as a vehicle fuel, it offers life-cycle greenhouse emission reductions over conventional fuels, depending on vehicle type, age, and duty cycle.

Nowadays, propane, which is technically a type of liquefied petroleum gas, is increasingly being marketed as “autogas” when it’s used as a motor fuel. By any moniker, it’s regarded as a competitive fuel for light-, medium-, and even some heavy-duty fleet operations.

Emissions aside, DOE points out that the “potential for lower maintenance costs is one reason behind propane’s popularity for use in light- and medium-duty vehicles, such as trucks and taxis, and for heavy-duty vehicles, such as school buses.” It also states that propane’s low carbon and low oil contamination characteristics may result in longer engine life, and that it performs well in cold weather climates because the fuel’s mixture (propane and air) is completely gaseous.

In addition, the agency says propane vehicles are similar to their gasoline counterparts with regard to power, acceleration, cruising speed, and driving range. Bi-fuel vehicles, which include a secondary fuel system and fuel supply, can provide greater range than dedicated propane or gasoline vehicles.

Propane is ideally suited for centrally fueled fleets or those that share refueling stations with other fleets, according to the Propane Education & Resource Center. PERC states that “autogas infrastructure beats conventional fuels and many alternative fuels” and that the fuel is “a non-contaminant of air, land, and water resources, reducing or even eliminating many EPA requirements for installing and maintaining diesel and gasoline infrastructure. For those who need to travel long distances, bi-fuel vehicles offer a gasoline backup to propane autogas.” Click here to read the full article.