FreightWAVES: The forgotten transportation fuel: Why some believe propane deserves a second look 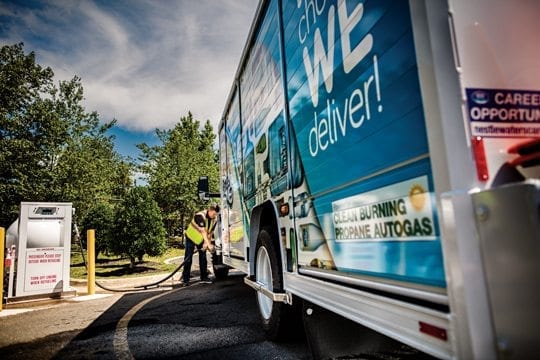 While propane doesn’t pack quite the punch diesel does, it does produce enough power to handle many of the tasks at a fraction of the overall cost, advocates say, up to Class 7 applications as this Ford F-650 box truck shows, so why is not a more popular fuel for commercial operations? ( Photo: Brian Straight/FreightWaves )

Strolling the floor at the National Truck Equipment Association’s Work Truck Show in Indianapolis last week, one booth had a large baby blue box van in it. Among the rest of the displays in the booth, this truck, built on the Ford (NYSE: F) F-750 truck platform, was powered by propane (sometimes called autogas) in a system developed by Roush CleanTech. The truck generated a broader question – “Why don’t more fleets use propane as a transportation fuel?”

Mike Taylor, director of autogas business development for the Propane Education & Resource Council (PERC), answered, “That is a really good question.” He told FreightWaves, “I wish I had a good answer.”

Propane is a byproduct of natural gas processing and petroleum refining and it is estimated that the U.S. has a 200-year supply of the fuel source. While it doesn’t pack quite the punch that diesel fuel does, it does produce enough power to handle many of the tasks diesel engines are asked to accomplish at a fraction of the overall cost, Taylor said.

Some fleets have embraced propane as a transportation fuel, while others stick with diesel or even gasoline if they operate medium-duty trucks. A primary reason is energy density. Based on a gallon of gasoline basis, diesel fuel provides 113 percent of the energy density, while propane provides just 73 percent, which is a significant drop-off.

But, one gallon of propane runs about 30 percent cheaper than a gallon of gasoline and has been as much as 50 percent cheaper than diesel at times, leading some to say that it’s okay if they use more propane fuel because their overall fuel cost is still less. As of March 11, the U.S. Energy Information Administration reported the national retail average of gasoline was $2.42, on-highway diesel was $3.07 and propane was $2.42. On top of that, as Taylor points out, propane vehicles do not have the same maintenance issues related to diesel exhaust after-treatment systems, specifically maintenance of the diesel particulate filter, and are priced comparably in many cases with diesel vehicles. The result is a lower total cost of ownership, he said.

“Depending on payload and route, propane is almost a gallon-for-gallon equivalent to gasoline,” Taylor said.

Propane has generally found acceptance in school bus fleets. Taylor said that more than 16,000 school buses operate each day in the U.S. on propane, carrying more than one million schoolchildren.

In 2014, the U.S. Department of Energy (DOE) produced a case study looking at propane-powered school bus fleets. It found that some of the school districts studied saved 50 percent on a cost-per mile basis for fuel and maintenance in comparison to diesel-powered buses. Return-on-investment was achieved in as little as three years, and no more than eight at the long-end, and the propane buses achieved 7.2 miles per gallon in the case study, over an average of 14,700 miles per year.

In addition to school buses, some fleets are finding propane to offer advantages, particularly in terms of meeting sustainability goals.

“Becoming a better steward of our environment is a priority for Nestlé Waters,” Bill Ardis, then national fleet manager for Nestle Waters’ ReadyRefresh business unit and now the company’s senior director of fleet services, said in a 2017 press release announcing the fleet would be adding 400 medium-duty propane vehicles to its ReadyRefresh fleet, bringing the total to more than 600. “We’ve been running propane autogas vehicles since 2014, beginning with five Class 5 vehicles. Based on the proven emissions reduction compared with our older diesel units, and lower fuel and total cost of ownership, we knew this was the right application for us within the alternative fuel space. With propane being domestically produced, it’s proven to have a more stable cost per gallon, while the fueling and maintenance infrastructures are much more cost- effective than other alternative fuel options.” To read the full article, click here.